What can food designers learn from behaviour scientists (and the other way around)?

This is a call to designers to dive into the world of behavioural sciences. Especially for food designers, applying insights into why people behave in a certain way will take your design multiple steps further. Yes, we as designers already do research ourselves, but I found that it happens in a different way than how social psychologists do their studies. So let’s see what they know, how they do it and let’s learn from them.

An essay by Madelaine Berlis

Doing research is my favourite part of design projects. I like to dive deep into literature, media articles, people’s opinions and thoughts, and into the possibilities and boundaries of a given environment. Research in the design world mainly takes place during the first fuzzy part of the design process, a time where you ‘swim’ for a while in the context of your design challenge. For curious — and slightly nerdy — people like me, this is an exciting period. Exploration of  previously unknown territory give you big piles of valuable information, first idea directions randomly pop up in your mind and you gain insights into which levers have the highest potential for disrupting the current system.

Researching the act of eating

Food is a great subject for research, since it is something you constantly put into your own body and it is very much embedded in our daily routines. We actually think about food more than anything else during the day and are constantly refraining ourselves from eating too much [1]. I like to conduct food research on myself, testing how I can fool my automatic, unconscious brain functions. When I’m hungry, for instance, I drink a glass of water to let my brain think that food is entering my body – and by doing that, I make sure I can make it until lunch without snacking. Or, in an other example I eat my dinner from a smaller plate which fools the system that estimates my portion sizing. 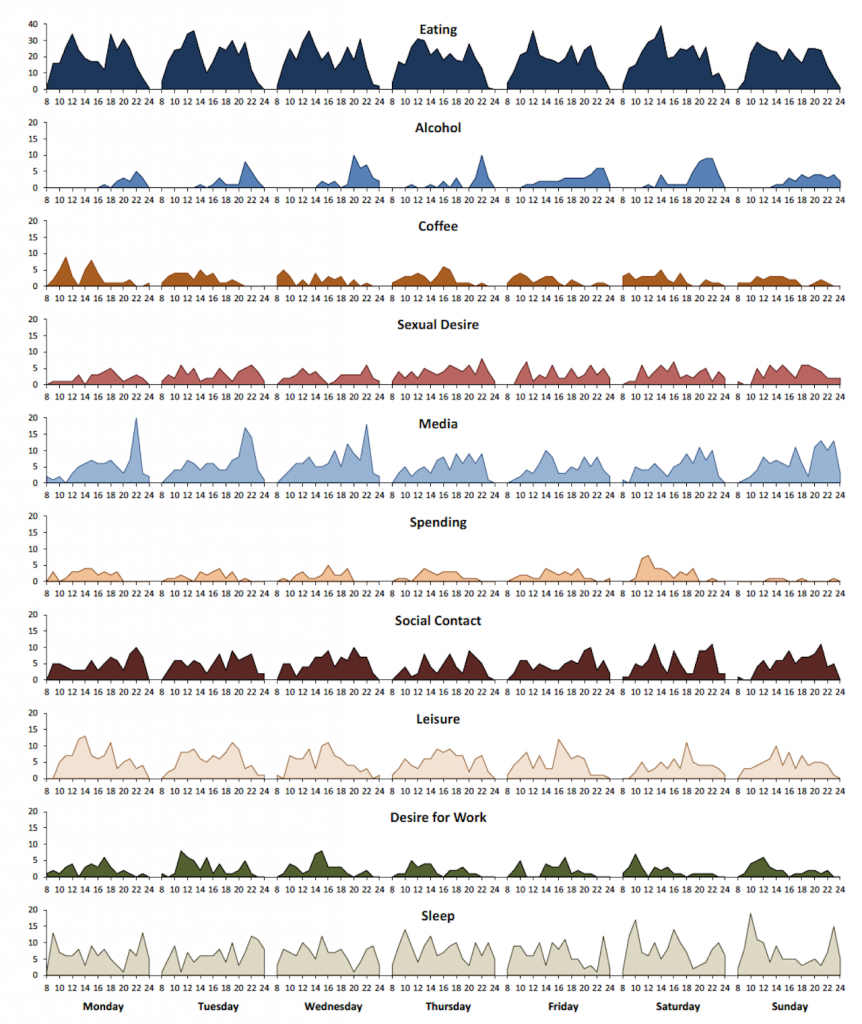 Image: Weekly frequency distributions of selected desires. As you can see, the highest desire is for eating and it’s present throughout the day.

"if we, the designers, would learn the theories that underlie people’s behaviour, it would improve the foundation of our designs and thus would strengthen the design concepts themselves."

Image: The Next Nature Network in vitro cookbook functions as a test setting for people to get used to eating in vitro meat and to adapt to the possibilities it can give us. Here, design increases the acceptance and the willingness of the crowd to try something new.

On the one hand, we have a large influence on what we eat, since we are the ones in control over what our hands put into our mouths. However, our evolutionary brain is wired to stuff ourselves with food, in order to survive later moments of scarcity. This leads to a constant conflict of interest between the old, evolutionary part of your brain and the modern, rational and conscious part. Before you start eating your dinner your rational intention could be ‘I won’t eat too much because I want to stay in shape’. After your first plate however, you suddenly cannot resist taking a second portion. Your body’s cravings seem very hard to tame at a moment like that.

This conflict typically falls within the realm of the behavioural sciences which knowledge goes much deeper than simply nudging your way out of it. Social psychologists constantly conduct research in which they try to figure out why people say that they want to do a certain thing — say, eating less chocolate — but behave the opposite. Changing people’s behaviour in a way that they will actually eat less chocolate, over a longer period of time, is then the aim of interventions that are created. It is not only behavioural sciences that use these topics and create interventions. There are many designers who have successfully come up with designs which potentially change the way we eat. What hasn’t really happened so far though, is a collaboration between the two disciplines.

I think that if designers would work together with behavioural scientists, or if we, the designers, would learn the theories that underlie people’s behaviour, it would improve the foundation of our designs and thus would strengthen the design concepts themselves. Most designers already conduct research methods to get to know their target group and the context of the project. Context mapping is a highly effective method because people’s dreams and wishes are revealed; something that cannot be obtained with a questionnaire. However, conducting the research and interpreting the outcomes still happens in an intuitive way, thereby lacking authority when arguing why certain directions were taken in the design process. Intuitive interpretations create a gap between what is concluded during research and what is designed. A solution could therefore be to relate research design outcomes to certain behavioural insights derived from psychological theory. To serve as a backbone for the final design. Moreover, behavioural insights can make sure that fewer tests are needed and add more certainty for a successful implementation of a design in society.

Additionally, behavioural insights as a starting point for designs can lead to interesting outcomes. Think of the ‘Volumes’ project of Marije Vogelzang, where Wansink’s research about the perception of food on a plate led to Marije’s design of ceramic objects which create the illusion of a fully stacked plate. There are so many interesting findings by researchers that can be a starting point for interesting design projects. Think of the insights of Charles Spence, a behavioural researcher who focuses on  tweaking the sensory part of the food experience. In his book ‘Gastrophysics’, numerous inspiring findings are listed that could lead to very interesting food behaviour designs. 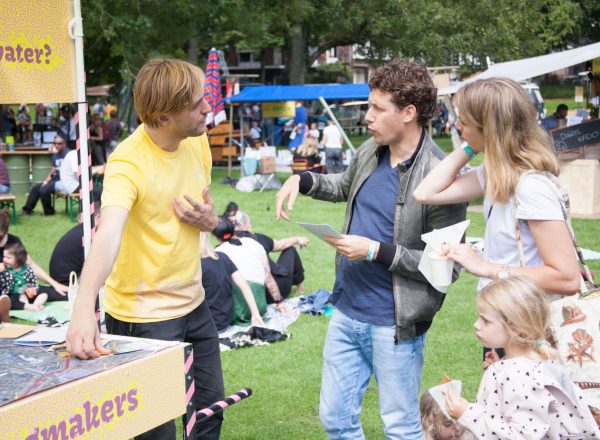 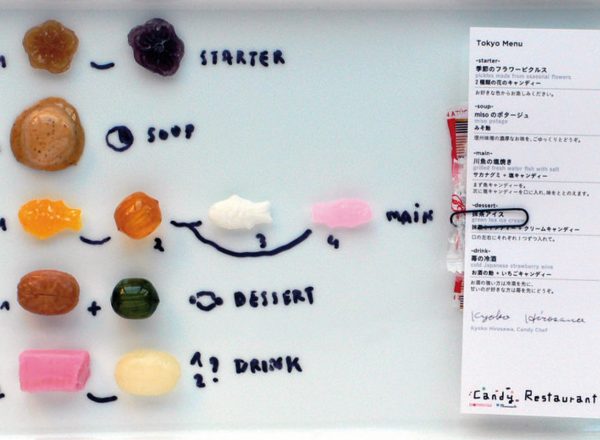 Image left: Afdeling Buitengewone Zaken uses experiment settings to gain insights and to deliver a proof of concept. These methods could bring conventional behavioural research to a higher level.

Image right: Martí Guixe’s candy restaurant, which could inspire social psychologists to pick up where he has stopped and research the impact such a dinner can have on people’s behaviour.

What about the value of a creative designer’s mind for scientists? Behavioural scientists are experts in conducting research and are basically walking dictionaries on different types of behaviour. However, they often lack the creativity that is needed for designing powerful interventions. Moreover, designers’ methods often unravel unexpected aspects of a given context by placing people in a new role or giving them an insightful experience. At Afdeling Buitengewone Zaken, we set up experiments in which people are exposed to a new role that they are not used to playing, or we give them an experience that knocks them off their feet. By testing these interventions in the field and changing variables — if they have no or an unwanted effect —, we create a strong proof of concept and gather powerful insights into how people respond. Scientists could also take existing designs, such as the experiential dinner designs of Marije Vogelzang, and analyse them from a behavioural perspective. This could lead to tweaks in those designs to make them even more effective.

If the Spanish designer Matrí Guixe would have worked together with a social psychologist, what would his ‘Candy Restaurant’ have looked like? In his concept Guixe tries to make people think about our modern food industry, by creating a whole dinner with only candy. Candy is shaped as typical meal items such as vegetables and hamburgers to raise questions about to what extent food should be designed. ‘What kind of behaviour sparks such a fictional restaurant?’ would be an interesting research question for a social psychologist.

Designers can also speculate about possible outcomes and desired behaviour when new scientific findings are revealed. Think of the moment that Mark Post created the first in vitro beef patty. The Next Nature Network took that opportunity to design an in vitro cookbook with new types of food that the introduction of lab meat in our society could bring about. This way, design can function as a way of creating a test setting where people can speculate on out how they would behave if a certain food product would be on the market. By presenting it as a design project, it is more easily accepted by the crowd and increases their willingness to test it.

Especially when it comes to food and the act of eating, collaboration between behavioural scientists and designers would be very fruitful. Eating is a basic behaviour, we do it multiple times a day and we have a hard time constraining our constantly craving, evolutionary brain. Stimulating people to eat more healthily — mainly less — is a big win for society. Not only does it lower health costs, it drastically decreases our environmental impact.

So, this is a call to all (food) designers and behavioural scientists to look for each other and start working together because there are many ways to do so. Alternatively, designers: go on a mission and explore the newest behavioural findings that you can design for. Or, become a behaviour expert yourself.

Madelaine is a social designer, interested in changing people’s behaviour in favour of society. She calls herself a realistic idealist because she wants to design towards a better world but in an achievable way. She is currently studying Behavioural Change as a Post-Master at the Radboud University, next to her job at Afdeling Buitengewone Zaken. Curious about the techniques social psychologists use and the underlying theories? Feel free to contact her.