“the entrance ticket was a vomit bag”

The Future Food Designer Chloé Rutzerveld visited the Disgusting Food Museum in Malmö, Sweden for us and told us about her experiences from surprising to gagging.

Disgust is described as a feeling of extreme repulsion towards something and influences our daily life choices in food, sexual behavior and personal habits. The evolutionary function of disgust is to help us avoid disease and unsafe food. Disgust is also something that fascinates people (at least from a safe distance).

Two weeks ago I visited the Disgusting Food Museum in Malmö, Sweden; a permanent exhibition displaying 80 of the world’s most disgusting foods. Very conveniently, the entrance ticket was a vomit bag which could come in handy when you enter the last stage of the exhibition: the tasting section. After you have seen and smelled the collection of the world’s weirdest and most disgusting dishes  – you get the opportunity to taste a couple of them. Like the famous Swedish Sorströmming (rotten fish), Hákarl (fermented shark from Iceland) or a spoon of the Chinese thousand year old eggs. The encouraging blackboard right next to the tasting bar reads: “11 days since last vomit”.

I expected to see dishes which would integrate fetuses, animal genitals, heads, organs and eyes, but what surprised me was the selection of western processed foods in the exhibition. How could salty licorice, gelatin candy, pop tarts and root beer make the selection of the world’s most disgusting foods? The same accounts for smelly cheeses. From my Western point of view and personal eating habits, it didn’t make sense to compare salty licorice with Balut (boiled duck egg with a partially developed fetus) and fried ginneapigs?

But I never considered the fact that something innocent like salty licorice or never expiring pop tarts could be considered as disgusting and strange by other cultures as the thousand year old eggs are for me. In that case, my appetite for salty licorice could be exactly the same as Chinese people craving fresh dog meat, or Mongolians ordering a shot of three penis liquor? Next to the dishes I expected to see, and the part I wouldn’t describe as disgusting at all, there was a whole section of the exhibition about ingredients and dishes I had never heard about. With fascination, disbelief (that there are people who actually eat those things) and slight disgust, I soaked in all the information. Not just because the ingredient or dish was fascinating, also because of the strange preparation method (Virgin boy eggs) or peculiar eating ritual (Ortolan). If you’re ever in Malmö I highly recommend visiting the Disgusting Food Museum. It will most probably change your mind about the concept of disgust and your cultural bias towards food. My top 6 of the most interesting disgusting dishes. 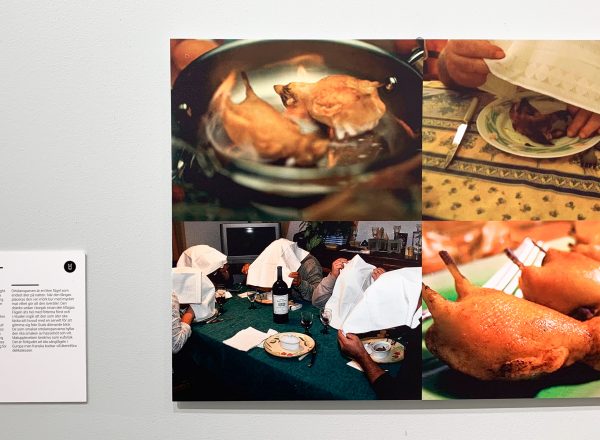 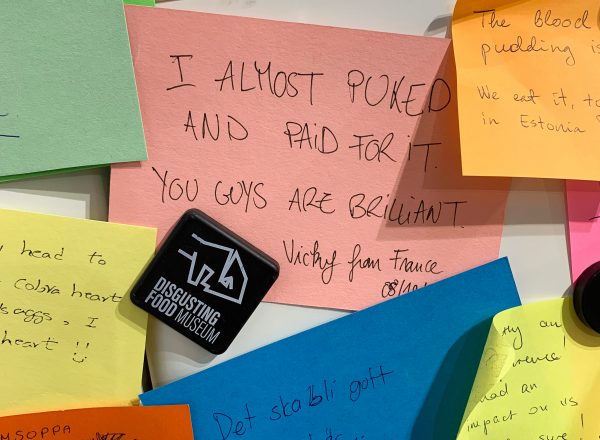 ‘At schools and markets, young boys’ urine is collected in buckets placed there by street vendors. The eggs are first soaked and then boiled in the urine. The egg shells are then cracked and continue to simmer for several hours to let the urine soak into the egg. The golden eggs smell strongly of urine, but the taste has been described as delicate, salty and addictive.’

‘The small Ortolan bird only eats at night. When captured, the bird is placed in a dark cage with abundant food, causing them to eat excessively. They are then drowned in brandy and cooked. It is ritualistically eaten whole, feet first, while covering one’s head with a napkin to hide from God’s judgment. Those who have tasted the tiny birds applaud the hazelnut flavors and rich gaminess of the meat. The eating experience is described as “close to ecstasy”. Eating this delicate songbird is banned across the EU, but French chefs are lobbying for its reintroduction.’

‘A freshly disemboweled seal is stuffed with up to 500 small arctic birds called little auk. The seal is then sewn shut and sealed with seal fat to prevent flies from getting in. The birds are buried and left to ferment in the carcass. Kiviak is eaten by bitting off the bird’s head and then sucking out the flavorful juices, but the softened birds can also be eaten whole, bones and all. It is especially popular during the arctic winter celebrations. The taste of kiviak has been described as similar to Gorgonzola cheese.’

‘Animal fat is whipped together with berries and fresh snow to make this ice cream. The fat can be from fish, caribou, moose, seal or walrus. Every family has their favorite recipe, ranging from simply mashing together fatty fish, berries and snow to advanced concoctions of multiple types of fats and berries with potatoes added for extra fluff. It has a frothy texture and is likened to eating old chewing gum with a sweet berry flavor and an oily, fishy aftertaste.’

‘This concoction, also known as a Mongolian Mary, is made with pickled sheep eyeballs and tomato juice. Sheep eyeballs are prized more for their jelly consistency than for the delicate mutton flavors. It’s known as a traditional hangover cure that dates back to the times of Genghis Khan. If eaten in large enough quantities, eyeballs are surprisingly nutritious.’

‘Baby mice are drowned and brewed in rice wine. The mice can only be a few days old, as they have to be blind and hairless. The brew is matured for up to a year before drinking. Mouse wine is consumed as a health tonic for asthma and liver diseases, rather than as an aperitif before a meal. Mouse wine tastes like gasoline with an aftertaste of rotting animals, and the smell is described as incredibly strong and putrid.’

My favorite sticky-note on the wall: “ I almost puked and paid for it – you guys are brilliant”

This article was written by Chloé Rutzerveld, read more about her on her website: www.chloerutzerveld.com