“Lifting aroma from its secretive niche into the spotlight.”

Having just recently graduated from the Food Non Food Department of Design Academy Eindhoven, Alexandra Genis sees her work as critical food design - sometimes very critical. ‘If I look at food design today, I see a lot of direct problem-solving. Vegetarian meat, technologically enhanced cooking, design against obesity and recycling of food waste dominate the media when it comes to food. These are important tasks at hand, of course. However, it’s what the public demands to see and I am sceptical about that.’ Thus the work of Alexandra is often the exact opposite of what is officially stamped as desirable. For her graduation project ATOMA she has travelled a universe of aromatic molecules to shed light on the secretive world of flavour.

ATOMA, a wordplay of atoms and aroma, is a series of spices to enable the domestic use of industrial aroma. From apple to egg, every flavour is a composition of molecules. Since the discovery of the true make-up of flavour a few decades ago, a massive body of industry has been responsible for flavouring all the foods on supermarket shelves. The addictive properties of potato chips and Coca-Cola are product of intentional science performed by a tiny group of people called flavourists. Those skilful craftsmen are working with more than 2000 molecules to design the flavours we experience every day. We usually perceive this as a rather unwanted case scenario, demanding all-natural foods. Alexandra became curious about the consequences of this demand. Nature cannot sustain the amounts of strawberries, vanilla, citrus and many more, required for flavouring all the products we want to eat. Thus Alexandra believes consumers have to make peace with science by lifting aroma from its secretive niche into the spotlight. Starting with the popular strawberry aroma, Alexandra translated each of the 24 main compounds (which form the flavour matrix of each single strawberry) into 3D modelled shapes. The objects were then flavoured, colour coded and casted from cocoa butter – to be rasped over any meal of your choice. Used all together the 24 compounds create strawberry taste while each can also be used on its own.

By bringing flavour molecules closer to people, Alexandra wants to expand public literacy of food ingredients and to empower consumers to make creative use of science without the need for a laboratory. 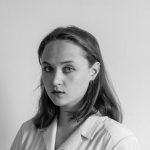 Read more about Alexandra Genis on her website: Tas2r.com