“I suddenly could combine my passion for food and interest in nature and science with technology and design.”

Chloé Rutzerveld is a Dutch designer that critically explores food production and consumption. After graduating from the Eindhoven University of Technology in 2014 with the project Edible Growth, she started her own studio Food & Concept Design. Chloé successfully combines design, science and technology in order to find new ways of making food more efficient, healthy and sustainable. By using food as medium, she makes new technologies and food issues tangible for a wide variety of people, facilitating better understanding and in-depth discussions of related themes.

Why do you work with Food & Design?

I’ve always had a huge passion for food and nature. I never thought about working with food and design, it just happened. I studied Industrial Design at the Eindhoven University of Technology (TU/e) and I didn’t like it at all until I started a project about cultured meat in the Next Nature Lab. That’s when everything changed. I suddenly could combine my passion for food and interest in nature and science with technology and design. At that point everything fell in place. I also like expressing my ideas through food because you can include everybody. Because we all need to eat – I think everyone can feel included in the discussion.

What went terribly wrong and what did you learn from it?

Twice I tried to bring a project (Edible Growth and STROOOP!) a step further. Either in terms of research and concept development or trying to bring it to the market. Both attempts failed. Mainly because I am totally not interested in selling vegetable stroopwafels or to continue a project for multiple years. It took a lot of time, energy and money – but it did help me discover that I don’t want to further develop my ideas. I love to think of innovative ways of food production and consumption and turn multidisciplinary research into one concrete future food scenario. But when the idea including a prototype / installation and exposition is finished, my attention drops because I get super excited to start something new and start a different exploration. But it would be great to find people who don’t like to develop new ideas but are good at the next step to develop the ideas further. 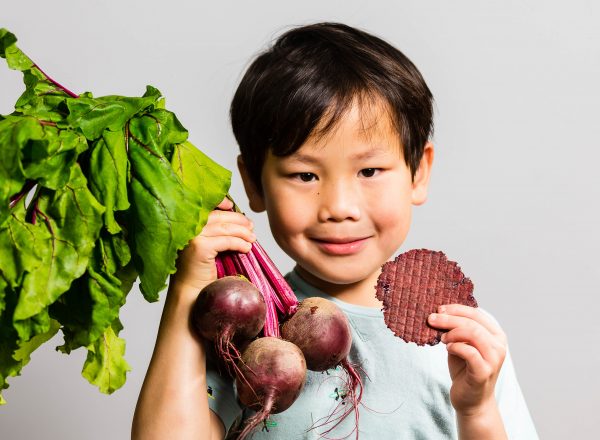 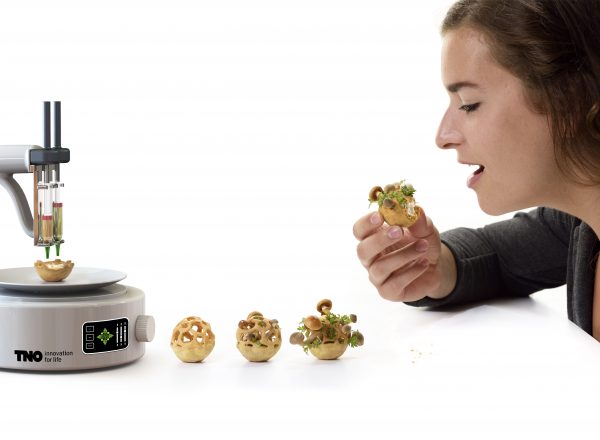 Can you tell us more about your well known project “Edible Growth”?

Edible Growth was my graduation project at the TU/e  in 2014. It is a critical project about the use of additive manufacturing techniques which proposes to use the technology as a means to enhance natural growth instead of using the printer merely as a form-machine to create crazy shapes of chocolate, sugar and pasta. I think it went viral because it was the right time to show a skeptical and different view on 3D food printing. Also the picture of my roommate eating the prototype and a very realistic stop motion of how it grows, made people think that Edible Growth was not a prototype / future food concept but that we could already print edible ecosystems. Now, 4 years after the launch of the project the TEDx presentation (Calgary 2015) has over 52.000 views and at least once every two weeks I get an email concerning a question, invitation or proposal related to Edible Growth. Crazy! When I just started my studio in 2014 I didn’t want to be known as the 3D food printing girl – I thought it was very limiting but it also created a lot of pressure to come up with something new, which was as good or even better. But after a while I embraced it, because who cares how people find you. It matters that they find me somehow and are interested in the way of thinking to start something new, together.

What is a less known project you did you are proud of?

That’s easy, definitely The Other Dinner! It was not really a project, more a very extensive research about the past present and future of meat during my internship in 2013 at the Open Wetlab of Waag Society in Amsterdam, that led towards an interactive public event and an experimental meat cookbook. A full day of nose-to-tail cooking, preparing and eating mice and muskrat and in the end a workshop on the culture of meat making. With 60 people (artist, scientists, environmentalists, chefs) we spent the entire day cooking, eating, experimenting and talking. My goal was to move past our Western taboos about eating weird parts of animals and to give them a hands-on experience with in vitro meat so that we can have an actual discussion about whether or not we would like to eat cultured meat in the future. And that it should not matter if the cultured meat is made from cow or mice stem cells if it would save a lot of time, energy and money. It was around the time that Mark Post presented the first cultured meat hamburger to the world! I loved this project so much because I could work for three months, super dedicated without any distractions, on one single project together with an amazing group of people . It was so fulfilling to see how such a big group of people got over their fear and disgust of eating brains, intestines, filled pig trotters and mouse liver bonbons. It created some sort of connection – that we were in this together. During those three months I spent so much time working with meat, that I became a vegetarian after the project for a very long time. So it definitely also changed my perspective and diet.

Read more about Chloé on her: