Last year Fernando Laposse won the Future Food Design Awards with his circular design project Totomoxtle, by turning waste of coloured cobs of Mexican native corn into beautiful surfacing veneer for interiors and furniture. In the meantime his project is raising awareness about the rapid loss of the original species of corn in today’s globalised world. Read how his project evolved in the past year.

What happened after winning the FFDA?

Fernando: I relocated my studio to a mountain village called Tonahuixtla in Mexico. This is the farming community that I am collaborating with. During harvest time, from December to February, I helped the men harvesting the corn and selecting the colored cobs to be turned into Totomoxtle. I also trained a group of ten women to process the leaves and turn them into Totomoxtle.

The people of Tonahuixtla have plenty of land. The problem is that a lot of it has turned infertile after years of herbicide abuse and inactivity. Therefore, I am supporting local efforts to turn vegetable waste into compost and liquid fertilizer, using a worm digester. We already turned a one hectare abandoned parcel into a testing site for the different seeds, using the compost and fertilizer to nourish the ground. Overall the land seems to be recovering and we had a harvest of three tonnes of native corn, which is not bad at all. 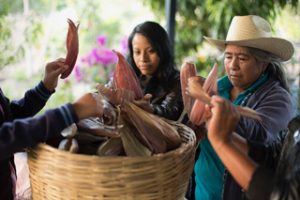 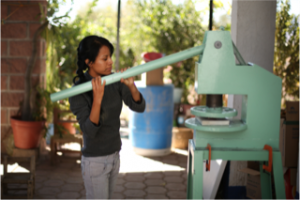 How has the FFDA accelerated your project?

The prize money helped me to set up the production site, buy equipment and enabled me to train and hire people.

For production I bought a manually operated hydraulic press and cutting dies to cut my specific designs. With this system we can produce more material without using any electricity. The investment to set up such a production plant is quite low so my mid term goal is to replicate this system in other indigenous communities around Mexico that produce different varieties of native corn.

Indirectly the FFDA meant a lot of exposure for Totomoxtle. The video I created to apply for the Future Food Design Awards (watch it here) went viral in Mexico. This opened up all sorts of new opportunities for the project. One of them was the interest of the CIMMYT – a Mexican-American research centre that is in charge of a nationwide native seed exchange program.

I had the privilege of visiting this world’s largest seed and maize germplasm bank and to meet Denise Costich, the director of the exchange program. The fact that we are selectively breeding traits related to husk colour instead of grain is quite unique and caught their attention.

The CIMMYT is now helping us with a scientific research on which particular seeds best suit the region and even more specific which parcel, taking into account the soil composition, humidity and altitude.

In June, the beginning of the rainy season, we will be planting new seeds. With the help of the CIMMYT we hope to have an even more successful harvest next winter and to extend the colour palette of Totomoxtle.

"The fact this new craft is employing women is changing family dynamics."

What is the impact of your project in Mexico?

We are creating new local employment for indigenous farmers. Because of the added value of the husks we ensure farmers can keep planting their heirloom varieties.

This new craft of making Totomoxtle is also employing women. We determined an average production performance and agreed to a set price per sheet. In average the women are now making about four times the normal wage for a day of labour in Tonahuixtla. Two women already managed to purchase a private water installation, which means a huge improvement in their life quality.

Not only does Totomoxtle create an alternative and well-paid source of employment, the fact it’s employing women is also changing the family dynamics. Totomoxtle is helping them have a more active financial role as opposed to doing domestic work and raising the children.

What can we expect from Totomoxtle in the future?

Our long term goal is to establish a seedbank directly in Tonahuixtla and to share our seeds with farmers all over the country, using the CIMMYT network. We are picking the best seeds and labelling not only with season and location but also with a sample of the husk of that particular cob.

Totomoxtle is already in many material libraries all over the world and this is starting to bring in some serious orders. In Holland for example I’m working with Materia, a global network of innovative materials.

Back in London I focus on developing new designs like for example this table (image below) that I just finished using the material from last season. 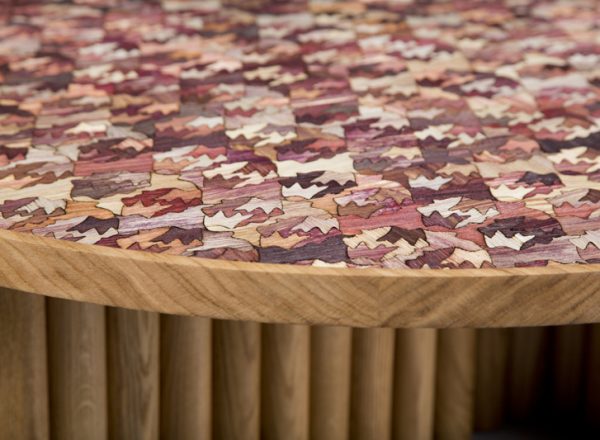 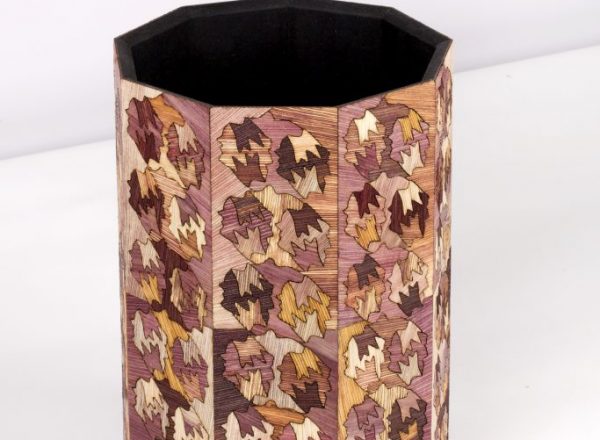 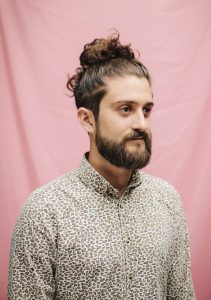