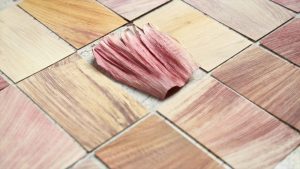 Totomoxtle is a project inspired by Mexico’s relationship with corn. Fernando used the skins of corn to create a veneer that showcases the naturally colorful variation of corn. The process is quite simple: the skins are flattened and stuck onto a hard material. As a result, the product can be sliced into tiles, ready for use. Not only is Totomoxtle a new sustainable material, Laposse also hopes that his project will create more awareness about the insecure future of farmers and traditional harvesting methods in a modern world. Fernando wants to use the prize money, which is intended to stimulate the project, to further involve and educate the local community. 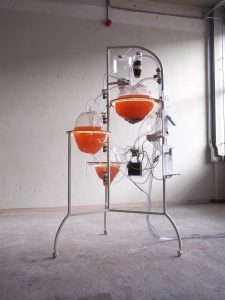 To serve the discussion of the relationship between humans to autonomous machines on the topic of food, Marie and Arvid created SAM. SAM employs water kefir grains to produce a beverage, acting as a small scale automated food production system. This hybrid entity is both technological and organic, intelligently managing recipes, prices, maintenance, service and labour, using humans only when necessary. 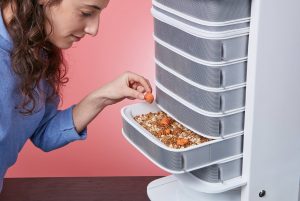 The Livin Farms Hive is a desktop farm to grow edible insects in people’s homes, to make people independent from larger systems to grow their own sustainable protein on food scraps in the kitchen. 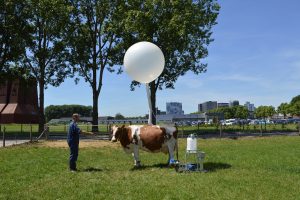 Cow&Co is a project that aims at redefining the farm animal in the society by bringing both the cows and the dairy production processes back into the city. Cow&Co reconnects the consumer to the producer, confronting him with issues like animal welfare and ethics of our food production, speaking metaphorically about the exploitation of farm animals. At the same time, the project proposes a transformative business model that enables decentralised fabrication, fusing agricultural innovations such as robotic milking, making use of the animal as a power source, and combining the physical and virtual world. 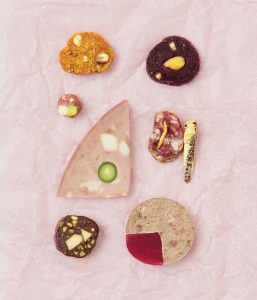 5. The Future Sausage by Carolien Niebling

To respond to the global need to eat less meat in the future Carolien teamed up with a molecular chef and a butcher and invented ten new sausages (Future Sausages) with ingredients with future potential. She created a book to explain the design of the sausage, including the construction and material of the sausage, production methods and the recipes of the ten developed Future Sausages.

With the rise of more high-tech production methods, to increase efficiency and and reduce the need of resources, the group of skeptical consumers who are longing for transparency and old school farming increases as well. With her project, Chloé aims to reduce the ‘fear’ by turning complicated, unsexy information into understandable, interactive experiences that educate and excite consumers about the opportunities these technologies can create. 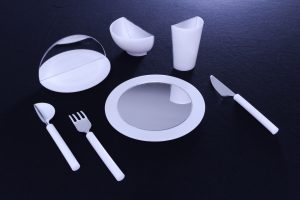 With their project, Daniel and Saki aim to target the future food shortages. They designed a set of tableware containing mirrors to trick visual perception of our food to increase satisfaction even though eating less than the usual amount. 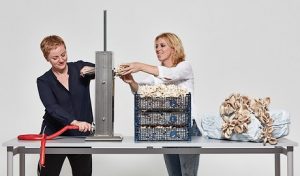 Over 60,000 kg of oyster mushrooms are produced every year by Van Lieshout, but the stems end up in the bin – about 20% of the harvest. What if you turn it into a plant-based sausage? That’s Botanic Bite. It is fifteen times longer than a regular sausage, because the same amount of land carries fifteen times the plant-base protein production capacity compared to animal-based protein. The Botanic Bite both addresses food waste and produces tasty meat alternatives. 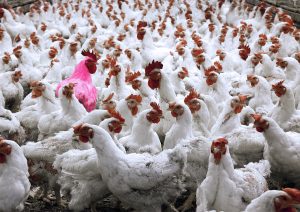 With their project, Leo and Linnea suggest to create a time capsule by genetically modifying the chicken species Gallus Gallus Domesticus and thereby change the colour to pink. The colouring will produce a pigment that will be fossilized. Additionally the DNA would carry a message: a call for change on a planet with unjust power and balance. 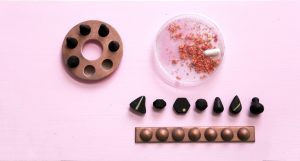 The bacteria in your gut say a lot about the state of your well-being. Maria Apud-Bell from London wondered if these bacteria could be measured to then draw precise conclusions about someone’s health. She developed a chocolate containing a cocktail of bacteria. Using an app that reads the information from the bacteria, you can see exactly how to manage the microbiotics. Would you take one?

To phase out e.g. tempting hamburger signs or take out whole sections of the supermarket that provide no nutritional value, damage the planet or animal life, Mariet and her team designed an AR tool to enable consumers to edit their life and visual world. 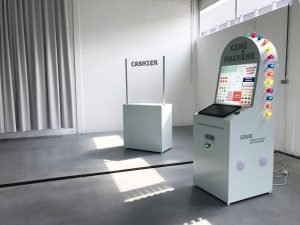 Say, would you prefer ‘regular’ or genetically modified vegetables on your plate? We all agree that a sustainable food future is highly necessary. Still, there are great differences of opinion about how that future should be accomplished. Do we want to let nature run its course with regards to our edible landscape, and if we do, will it be nutritious enough? Or do we opt for high-tech solutions such as genetic modification? And what would be the consequences? Mies Loogman explores this with her Gene Machine. 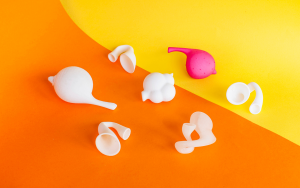 Protein Fantasy is a conceptual and speculative project that was designed to question industrialized food systems that prioritize high volume, low cost, unsustainable practices and lack of design diversity. It is an alternative reality, an at-home self-sufficient farming system, which consists of a domestic garden and a protein fermentation machine to grow various proteins at home and ferment them. Food will be categorized by their own eating textures and the way humans utilize them.