The Dutch Design Week was held virtually this year and the city of Eindhoven’s restaurants were forced to close too. So the city’s marketing department came up with the idea of putting six chefs together with six different designers and creating a mini series of cookery programmes with a difference.

The Dutch Design Week (DDW), which normally attracts around 335,000 visitors to the city of Eindhoven annually, took place virtually this year. Not only was the physical experience of DDW cancelled, but the city’s restaurants had to close too as part of pandemic control measures. So the city’s marketing department, Eindhoven365, decided to launch a new online series, called ‘Hungry for Design’, asking: “what happens when the worlds of design and gastronomy come together?”

In the six-part series, top chefs were linked to local designers and the chefs were challenged to develop a dish based on the work of their designer counterpart. Among the chefs are well-known names such as Dick Middelweerd, Naresh Ramdjas, and Cas Pikaar. The participating designers were all young, talented designers with different backgrounds: from a social designer to an architect and from a sound designer to a material researcher. Bringing the different disciplines together resulted in special collaborations, common ground when it came to the creative process, and, of course, great food.

“Because where disciplines come together, innovation starts”

The episodes were hosted by moderator and food designer Annelies Hermsen. As the daughter of Michelin chef Toine Hermsen and Design Academy Eindhoven alumna, Annelies understands the worlds of both chefs and designers. In addition to the online series, the recipes of the six dishes can be found online, so that the viewer can try to cook the dishes at home.

Here is the line-up for each episode: 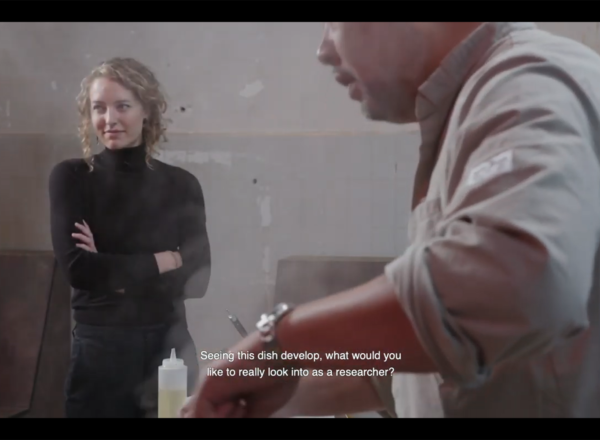 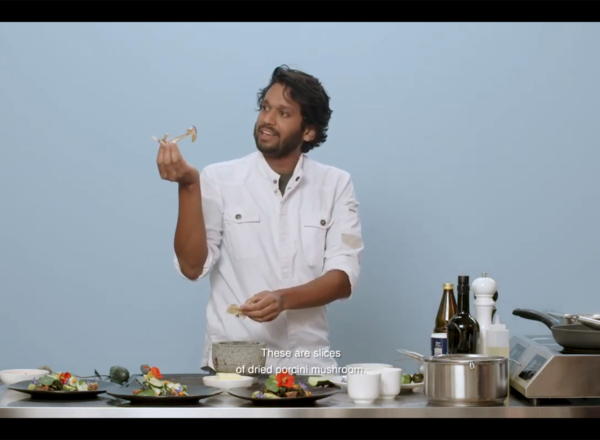 Raoul Vleugels graduated as an architect from Eindhoven University of Technology in 2011. In 2014 he and Niels Groeneveld started Werkstatt, an architectural firm with a diverse portfolio in sustainable building.

Mark Leenders is chef at Pullman Eindhoven Cocagne Vestdijk 47. He graduated from Rooi Pannen in Eindhoven and then went on to work and learn at several restaurants. Mark likes to use pure flavors, and bases his modern creations on classic French cuisine, with a preference for local products.

Lotte de Raadt is a designer and ceramicist. She graduated from the Design Academy Eindhoven (DAE) in 2010 and has her own studio and ceramics workshop, where she aspires to create public awareness on issues surrounding the usage of water.

Dick Middelweerd is head chef and owner of two-star restaurant De Treeswijkhoeve in Waalre. After studying in Utrecht and completing military service, he obtained the title SVH Meesterkok in 1990. The kitchen of Middelweerd can be described as classic on a traditional basis with many local products and various international influences.

Renee Scheepers graduated from the Man & Well-Being department of DAE in 2013. Immediately after, she started design collective NUL ZES with a couple of peers. With her own studio, Renee, as a design researcher, tries to find answers to social issues.

Taks Yuen is the owner of Chinese restaurant Mei Wah in Eindhoven. Together with his wife and mother, he is now the third generation to run the restaurant, which offers a mix of centuries-old family recipes and contemporary creations. Last year Mei Wah was named Asian Restaurant of the Year by GaultMillau.

Ricky van Broekhoven is a designer, researcher, and musician. He graduated in 2012 with a master’s degree in Interior Architecture. Ricky has a fascination for phenomena that are usually hidden but can be experienced under the right circumstances. With his spatial interventions, he tries to make sound visible.

Eveline Wu is an entrepreneur and owner of several hospitality concepts, including four MOOD restaurants. She grew up in a small village near Shanghai, with a Chinese chef as a father. Once in the Netherlands, she started working in the hospitality industry herself and in 2016 she became world champion Chinese Kitchens.

Lonny van Ryswyck graduated from Design Academy Eindhoven and founded Atelier NL 14 years ago, together with Nadine Sterk. Through local sourcing, Atelier NL develops everyday objects that show the richness of the earth and its raw materials, such as sand and clay.

Cas Pikaar is the chef of restaurant Doyy in Eindhoven. During his education at the Rooi Pannen, he worked at several top restaurants such as Wiesen, Wollerich, and Tribeca. Cas cooks classic French with influences from Asian and Middle Eastern cuisine. In January 2020 he won the Michelin Young Chef Award.

Sanne Schuurman is a designer, art director, and one of the co-founders of Envisions, a collective consisting of 23 designers with a shared fascination for material research. The goal of the collective is to offer the industry new perspectives on materials, techniques, and production facilities.

Naresh Ramdjas is a chef, food stylist, finalist of MasterChef Holland, and designer. Whilst studying at the DAE, he noticed that edible materials are much easier to design with than wood or metal, for example. Nowadays he is a curator and chef of Creative Food Studio and pop-up initiative Nareshtaurant.

The six episodes are now available online on ThisisEindhoven.com and the YouTube channel of @Eindhovencity.