Artistic research conference Food Friction commenced on the 30th of November, 2018 in Arnhem, the Netherlands. A city in the Netherlands known for its fashion and a famous World War II battle, it is also home to ArtEZ University of the Arts which organised the event curated by food designer Katja Gruijters. Topics circled the role that designers can play in creating new perspectives and finding possible solutions for the planetary and environmental crises that are impacting our food system, our supply chains, our health and our behaviour. By hosting talks, workshops, performances, and edible interventions, Food Friction intends to spark interdisciplinary collaborations between politicians, scientists, artists and entrepreneurs and display to visitors the value of the critical and creative thought processes needed to ignite innovation.

In the morning, Wageningen University & Research president Louise Fresco and ArtEZ Graduate School dean Nishant Shah were among four keynote speakers who provided insight into the world of food and the current developments in their respective fields. Their speeches underlined the urge for various disciplines to collaborate, and pleaded with the audience to combine their diverse approaches and visions. Furthermore, Marti Guixe showed the audience an overview of his work of the last 20 years, emphasising his joy of working with food as a material to express bigger concepts. The final keynote speaker, former NASA researcher Angelo Vermeulen, is a biologist and and artist alongside his work as a space systems researcher. With his multidisciplinary background, Vermeulen collaborates closely with practicing scientists while also constructing multimedia installations in galleries and museums, building communities through design and co-creation. He spoke about his research on the impact on the possible evolution of small species made by the environment and food supply, and what growing, cultivating and preparing food in space could look like.

The afternoon consisted of a program with lectures, presentations and debates around 5 major themes in the world of food, namely:

Food & Fiction: Food concerns all of us, and though some people know more about food than others, everybody has some level of understanding about it. Many people cherish differing assumptions about food, and though absolute certainty does not exist, assumptions, right or wrong, provide a vision of what we can expect. These assumptions grow from a plethora of reasons, including but not limited to tradition, delusion, experience, media perception, fear of death, recklessness, mood, hearsay, earlier research outcomes,  intuition, strategic brand influence, and habits.

For example, a gluten allergy is far less common than diabetes. Nevertheless, consumers are less inclined to avoid sugar than gluten due to media, marketing and convenience. EAT ART Collective was part of the panel discussion around E numbers in food. There seems to be a societal fear of e-numbers, which rather than being based in facts or reason, highlight the consumer’s distrust in the current food system. EAT ART Collective intends to create awareness around this topic by creating playful interventions and questions for the public. The food-reality is a confusing one, and abstract facts cannot speak for themselves – but stories can produce the desired certainty with fictional truths. The issue at hand is finding ways to express food facts in such a way that consumers can live a healthy life with the support of simple narratives that suppress unjustifiable distrust. 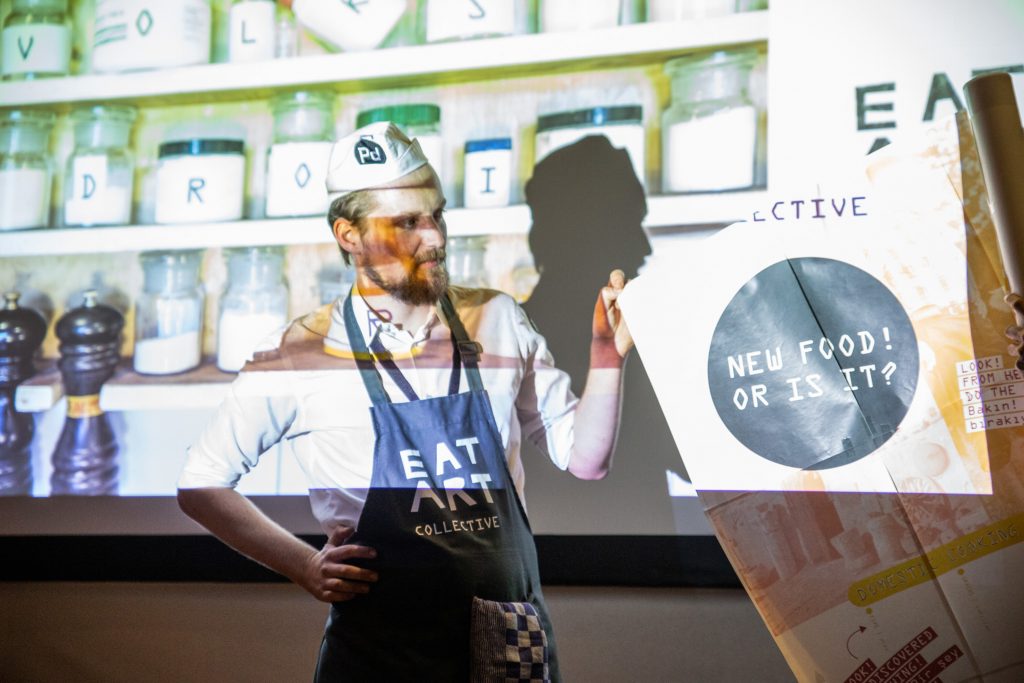 Food & Agriculture: We see that nowadays farming is torn between extremes. Food grows on extended stretches of land, food grows in the ocean, food grows in back yards, food grows in greenhouses, and food grows in urban machines. Farms can even become tourist attractions. Markets are filled with desires, health imposes minimum requirements, the climate enforces limitations and financial systems exercise their ruthless hand. Next to that, the idealised image of farming conjures an idyllic painting; austere men and women work the land providing us with grain, fruit and meat. At sea, there are strong men handling nets on rough waters. Most of our food is sold in bags and boxes, transparent or with an explicit product image. Imperfections are not allowed, and when they are they are sold as gimmicks. More than ever, food contributes to your identity – but its origin gets blurred in the process. It seems like all we consume is the story of the packaging.

In addition, the pursuit for balance in growing, producing and distributing food while decreasing waste is vital. Consumers should be able to enjoy a good diet without overfilling the waste bin. New sources of food can be found in water and on land, and new ways of dealing with superfluous production will lead to the development of new business models: better quality food without spillage.

Food & Technology: The amount of knowledge in the field of food production is rapidly increasing, expanding the possibilities of food, increasing precision, creating new ways of growing food and leading to a strong increase in quality. The opportunities offered from the nano-scale to the macro level by developments in mechanics, electronics and bio-engineering are soaring.

Genetic technology holds seemingly unbounded promise, which is not all that new if we look at human tinkering in the genetics of pets or cattle and tulips. The advantages could mean a reduction in the use of pesticides and general quality improvement, but the disadvantages concern corporate monopolies and lack of transparency. This implies a tradeoff that, as a result, requires choices in the technologies we allow ourselves to use and the purposes for which we apply them. Here, design has the potential to find new applications and feed on moral considerations. One inspiring lecture was held by the studio Center for Genomic Gastronomy, an artist-led think tank that examines the biotechnologies and biodiversity of human food systems. Their focus lies in upcoming scientific and socio-cultural developments and  prototyping alternative culinary futures. 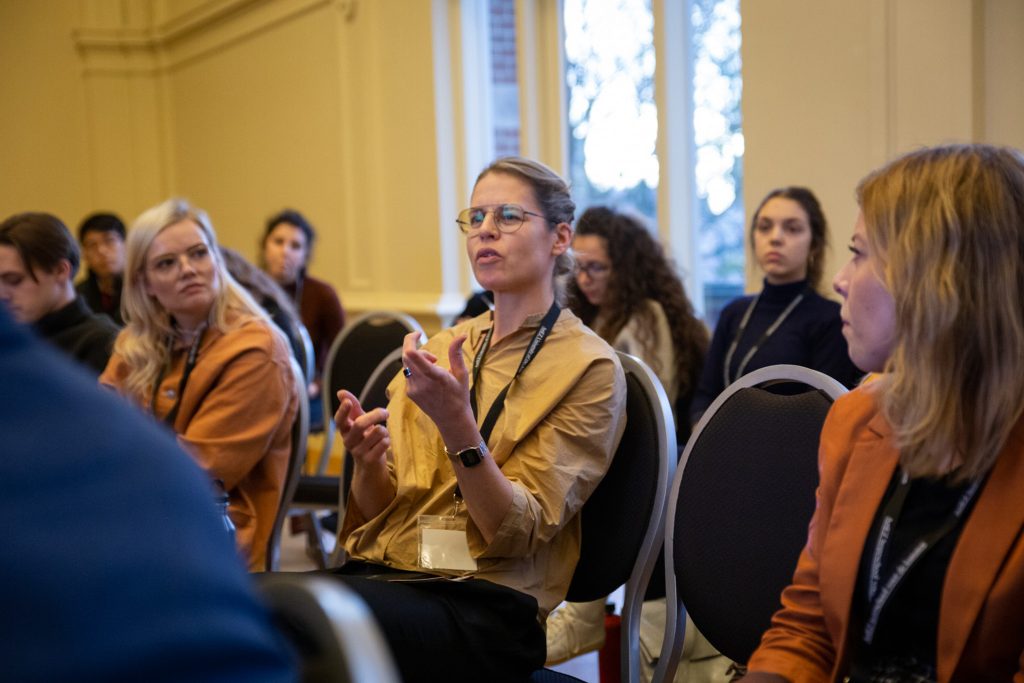 Food & Culture: Food identity used to be based on the simple principles of availability. It is now subject to the volatility of personal preferences, brands, beliefs and fashion. Walking the line between adventure and routine when the two have become so close together is a privileged but challenging conundrum. Culture and identity generate small differences between remarkably similar groups. For example, what people eat depends on where they live and how much they can afford. The more people can afford, the more varied their diet will be. Globalisation renders us both richer in style and poorer in compelling extremes, resulting in a worldwide acceptance of similar food. While on the other hand, a reactionary movement dedicated to bringing back the appreciation for local and regional foods is gaining traction worldwide.

Food & Behaviour: The kind of food that people like to consume is not the same as what they consider wise to eat and drink. Behaviour is only partly rational, which implies that creating awareness around healthy diets is not sufficient enough to adjust habits. Therefore, a change in behaviour requires getting under the consumer’s skin: a place where marketing and advertising could play a large role. Communication about food is disturbed by the omnipresent hum of the mixed and often mistaken messages of the masses: nowadays everybody eats, everybody publishes, everybody sees, everybody reads and everybody believes. This turbulent mix is complicated to navigate, and there is little focus in addressing and emphasising the right facts and information around food. One day, coffee is healthy, the next it is poisonous. Now more than ever, food is subject to fashion, used to supplement an individual’s identity, personal health, and leisure time. 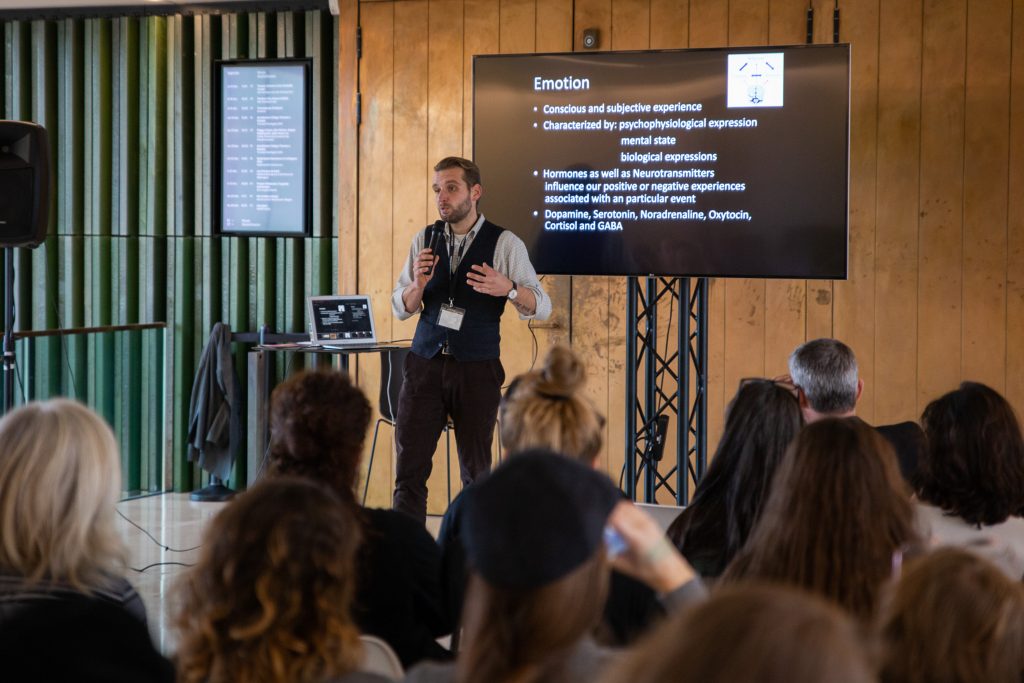 Quoting professor of product design and interior architecture at ArtEZ Dr. Jeroen van den Eijnde: “In a time where everything seems fluid and uncertain, people cling to the basic requirements in life: shelter, protection and identity. As biological creatures, people’s first priority is to provide food, clothing and a home and the ingredients, materials and tools necessary to prepare and make them. But besides being a Home Faber, human kind is above all a Homo Semioticus, whose individual identity and that of the community is derived from a meaningful environment. The current complex, highly individualised and advanced technological society poses designers the essential question of how our living and working environment can be designed meaningfully. With their bodies, eyes, ears and hands, people are constantly negotiating with objects and their surrounding space. The designer is the most important mediator in these negotiations.”

The designer as a mediator has always been helping people navigate daily life, and through this conference has been introduced to tools and subjects that it can employ to help build and negotiate the future of food.

This article was written by Katinka Versendaal, read more about her on her website. 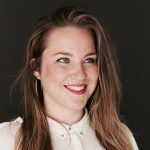