The potential of the cultured meat industry is huge in that it has the potential to solve many of the ethical and environmental issues around farming animals for mass-consumption, but first of all we have to learn to accept it. Yuval Yancovitch is a recent industrial design graduate from the Holon Institute of Technology in Israel. For her final project, she designed four new lab-grown animal proteins. The DIFD asked her to tell us more about her project.

What is your connection to food and design and what is your understanding of the field?

In recent years, the field of culinary design has had a lot of recognition and exposure. During my studies I began exploring ways of integrating culinary fields and design. As an industrial designer I am always interested in objects and how different cultural, historical and emotional aspects affect our lives. In my opinion food has the same effect. It is a fascinating field full of historical and cultural baggage, that has shaped our world since ancient times. The integration of food and design creates new fields for me to explore, and allows me to bring my point of view to the fore.

“Evolving in Vitro” was your graduate project from H.I.T – Holon Institute of Technology,  what path led you to this topic and outcome?

My graduation project “Evolving in Vitro” was born out of the understanding that we need to change the way we consume and produce food. Especially now that we possess the knowledge and technology to do so. Last summer I was reading an article that asked : “How can we feed everyone without making the planet an uninhabitable place?” The article presented two possible approaches: 1) apocalyptic environmentalism, which is the belief that unless humankind drastically reduces consumption and limits population, it will ravage global ecosystems irreversibly, and 2) technological optimism, which is an ideology based on the premise that advances in science and technology will lead us on a path to utopia. The main controversy centres around the unsustainable nature of our agricultural systems and how to maintain our way of life. I started asking myself what my own opinion is and how can I, as a designer, respond to these questions?

So what was your conclusion? Are we destroyers or can we fix things?

Watching  how our society intervenes in nature and changes it always repels me.  As a child I was raised in the countryside, surrounded by strawberry fields and orange trees. Before reading the research, I saw myself as part of this “apocalyptic environmentalism”. But while I was doing my research I began to hear more about this new field called Cellular Agriculture which theoretically has the potential to be a game changer in the food industry. As I continued, I began to relate to the technological optimism approach, which says we can adopt new agriculture methods, even if it means changing old habits. 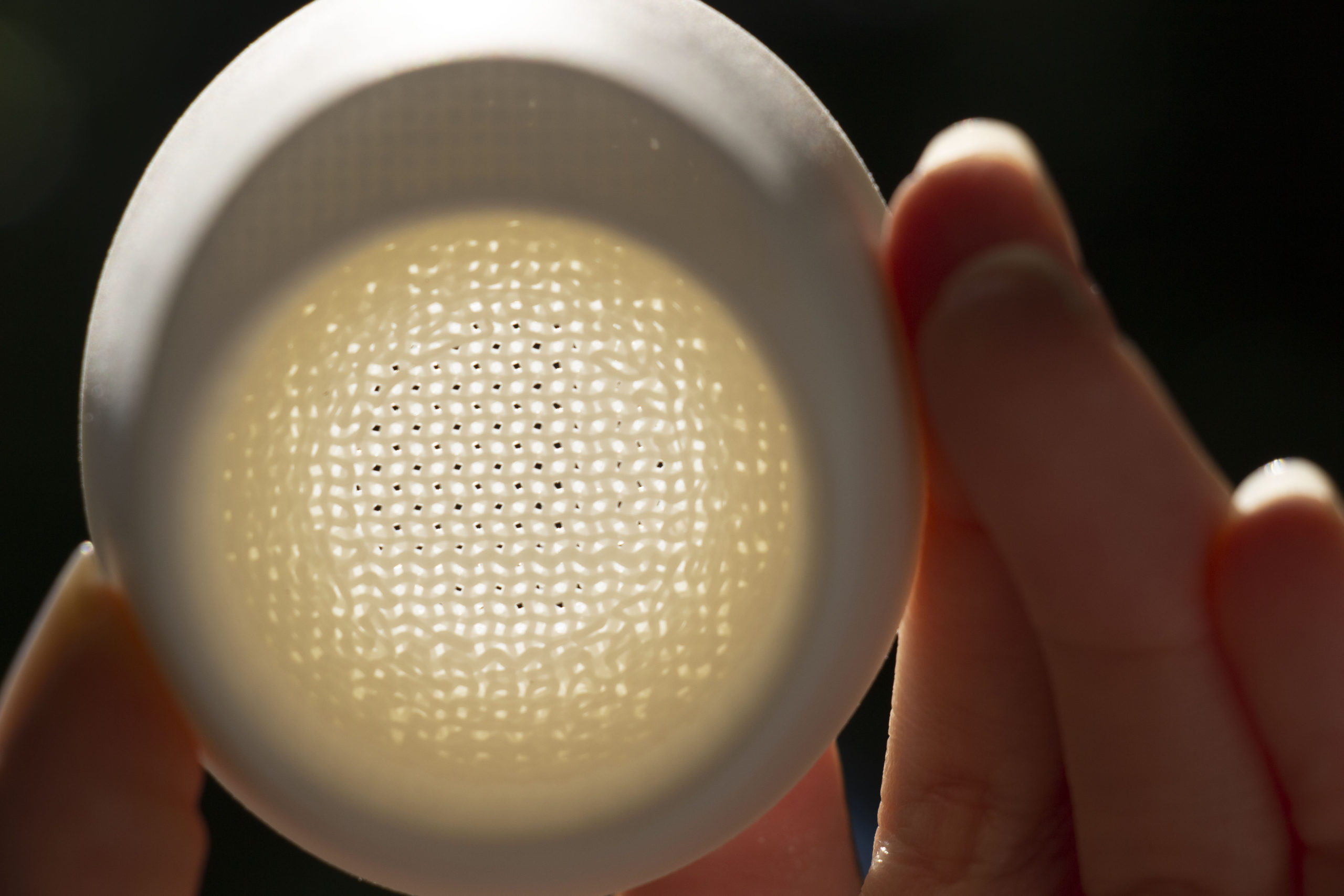 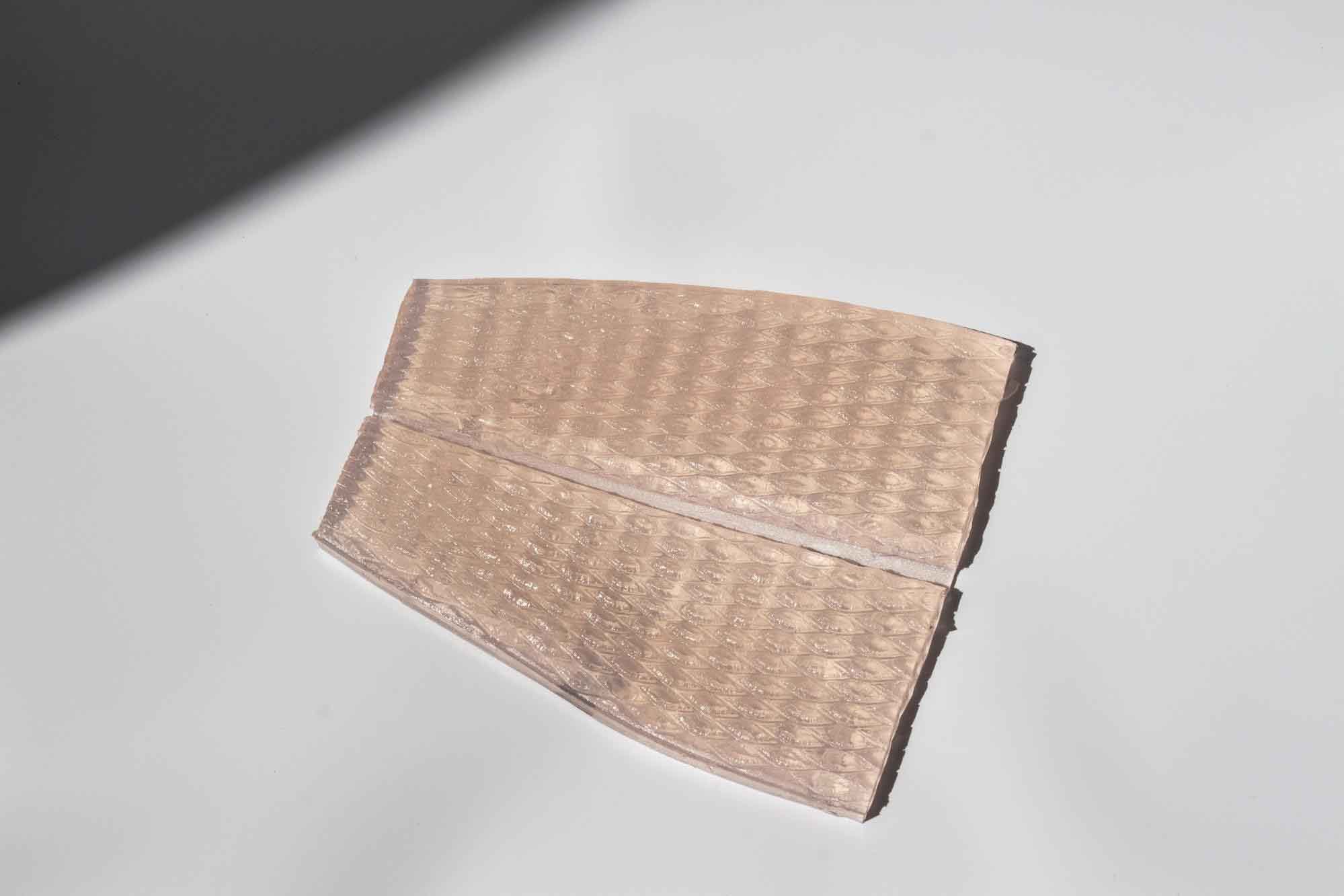 What is the Cellular Agriculture Revolution?

Cellular Agriculture is the fourth Agricultural Revolution. It is the next step in the evolution of our food. There have been many food revolutions throughout history – starting with the transition from hunter-gatherers to agriculture, settlement and societies. The Industrial Revolution brought us commercially-prepared, mass-produced food – a system upon which the modern western diet is based.

Nowadays, we are becoming more aware of the problems associated with intensive animal farming, not only its impact on the environment and our health, but ethically as well. But a new field is now being shaped, embracing technologies which will affect the consumption of meat. Cellular agriculture enables us to use stem cells from any animal in order to grow meat tissue for food under laboratory conditions. While doing so we can remove many of the harmful aspects of current meat production. I believe this is an exciting new approach which can change completely the way we consume meat.

However, from my point of view,  it will have no effect at all if we, as a society, are not more open-minded towards this change. I believe our generation will experience difficulties adopting this new approach, unlike the next one, which will be born into a world in which cellular agriculture is commonplace.

Without considering the aspects of regulation, costs and industrial production, the real issue is, in my opinion, connected to cultural adaptations. Especially when talking about what I called the Mid-Generation – people who grew up eating meat on the bone and carry cultural baggage regarding animal meat.

Tell us about the new proteins you designed.

I designed a set of four new proteins and envisioned them being sold alongside slaughtered animal meat for a while before eventually completely replacing it. Each protein refers to a particular animal flesh archetype that has been consumed along the path of human culinary evolution: shrimp, bone marrow, ribs and fish. By using these archetypes, which are part of our collective memory, I tried to mediate between the natural and artificial worlds. Each protein provides a different eating experience for different meat characteristics. The project asks us to embrace new technologies, rather than be threatened by them. The meat is grown on porous scaffold which is manufactured using 3D printing technology.By using 3D printing I am able to control the design and architecture of the porous that are necessary for the stem’s growing process, as well as to determine the 3D shape of the final product. 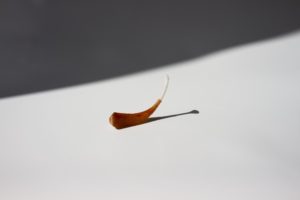 The shrimp is an appetizer. One bite that you can eat using the sealed handle which remains bare. 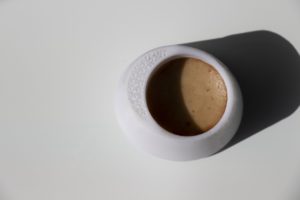 The bone marrow represents ancient times,  It is designed for a sensory eating experience. By controlling the surface texture, I designed a porous tunnel inside the object which functions like a straw and enables the user to suck the marrow out of the bone like our ancestors used to do. 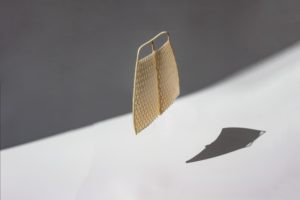 The fish protein structure refers to symmetry in biology, allowing two people to share it by “filleting” the protein and removing the structure within that splits it into two evenly portions. The act of filleting leaves a texture on the protein which echoes the texture of fish scales, which also allows sauces to stick to it better. 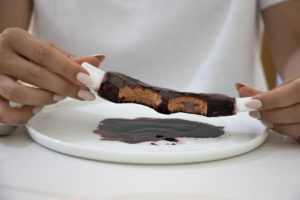 The ribs  are inspired by the social activity of sharing food and eating in groups. They are produced as one package assembled from multiple units joined. Ribs are chunks made to be shared, breaking each unit from the package creates a portion. The nonporous surface allows the user to grab the rib and eat it with their hands.

Did you collaborate with any scientists or specialists?

Israel is one of the front runners in the race to produce cultured meat. During my research I consulted with a lot of biologists, trying to understand the logic behind the process of producing cultured meat. Cultured meat is based on tissue-engineering methods from the field of medicine. I created my own brief for the project based on what I learned from specialists in the field of cultured meat and was guided by my mentor for this project Ori Ben-Zvi. These sets of rules helped me to build a framework that granted the project a more realistic aspect.

What are your next steps and plans for this project?

I believe this project opens up an opportunity for a new and fresh discussion, not just in vegetarians and vegan circles but amongst meat-eaters as well. I think this project addresses a very crucial matter that can contribute to the cultured meat industry: the cultural and historical meaning of food we carry within ourselves must be taken in consideration while designing food for the future, especially with what appears to be the next generation of proteins. 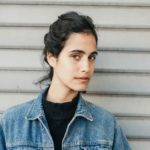