Aurélie Fontan is a sustainable fashion designer focused on biodesign and ethical manufacturing processes. She has been working at the ASCUS Art & Science Lab for two years, researching and practicing biodesign with slime mould and kombucha, applied to fashion artefacts. Aurélie is the recipient of numerous awards: Dame Vivienne Westwood Sustainable and Ethical Award, Catwalk Textiles, M&S Womenswear Award at Graduate Fashion Week 2018 and an Honorary Mention for the kombucha dress at Reshape Competition in Barcelona. Our correspondent Steph Marsden discussed Aurélie’s inspiration and design process with her at her recent exhibition ‘Tensegrity’, which was part of this year's Edinburgh Science Festival.

Aurélie’s background is in fine art, having worked in a variety of mediums including photography, sculpture and painting. Yet, having enjoyed merging textiles and installation, she soon opted to study fashion design. She chose Edinburgh College of Art as she thought it would allow for more innovation and technology in the fashion design process than that of the couture scene of Paris, allowing her to combine “technology, materials, thinking and feeling”.

Working within a brief gave her an end goal, and she started thinking about the practicality, sustainability and the materiality of what she designed. Whilst at school, Aurélie was very interested in biology, but within a siloed educational system in France, she didn’t get much of an opportunity to continue to apply her interested in science. Examining bio-art within her final year project gave her an opportunity to recombine her interest with that of fashion design. Her graduate collection ‘Tensegrity’ combines craft and technology, based on science imagery and disciplines – one of her final pieces is entirely grown from kombucha. 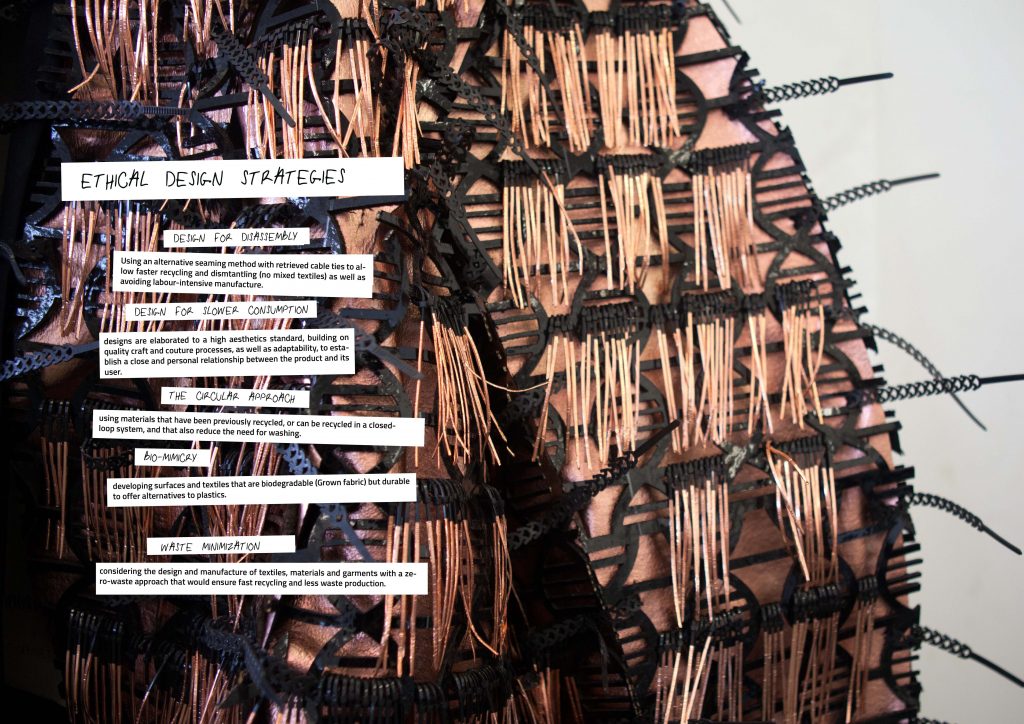 Becoming aware of the pioneering bio-design work by Suzanne Lee, Aurélie was keen to work further to explore materiality and elevate this material within her own collection, believing that couture can help push forward the rest of the fashion industry, to make more sustainable choices: “In the fashion world I don’t have that many people interested in the kombucha dress because the fashion world can sometimes be so closed-minded…a lot of people don’t understand cross-disciplinary work. They ask… ’Do you grow your own dress from scratch? So how does that work? What is kombucha?’ It took me a long time to explain everything…”

Kombucha is a fermented drink made from tea, sugar and a ‘SCOBY’ which  stands for ‘symbiotic culture of bacteria and yeasts’. Taking  Suzanne Lee’s open source recipe she began to grow it at home, in her bedroom: “Adding vinegar to the SCOBY mix allows you to create a kind of biofilm. When it’s matured, you take it out to dry it and you have a fabric.” To those familiar with the smell of kombucha, the material doesn’t smell sour as expected, instead smelling sweet, like honey. Aurélie explains that when dried, the material loses 90% of its humidity, but this pellicle is still sensitive to moisture and humidity: “It will never go back to its original state, it might start biodegrading by itself or getting mouldy (also a process of biodegradation). So the way I developed the material was to develop types of coating, using various types of glue.”

“Food is the thing that connects us to the world of bacteria and fungi.”

Aurélie believes that as the field of biodesign grows, food and other design fields are going to overlap more: “Food is the thing that connects us to the world of bacteria and fungi.”

Aurélie noticed stark contrasts between the humidity levels in France and in Scotland: “In France, everything is so dry, here, food gets mouldy quite easily, and I think mould is something that people get really scared about. Actually, you should be happy your food gets mouldy because it means that there are not that many artificial preservatives! Observing the random moulding process happening in my flat, I got inspired.… the cooking and brewing process definitely inspired me more to think about the process.” As kombucha is a cruelty-free method which could be an alternative to animal leather, the innovation has had a lot of interest from the vegan community. For Aurélie, the cooking and brewing process has  inspired her more to think about the consciousness of organisms: ”When you dig a bit deeper… you see in a way, this thing is still alive… it’s still bacteria…it’s evolving and growing, so where is the line? For me, it’s really interesting to think about that, for example the case of  people eating oysters”. Oysters are bivalve creatures and are considered not sentient creatures, therefore may be considered more ethical to eat. 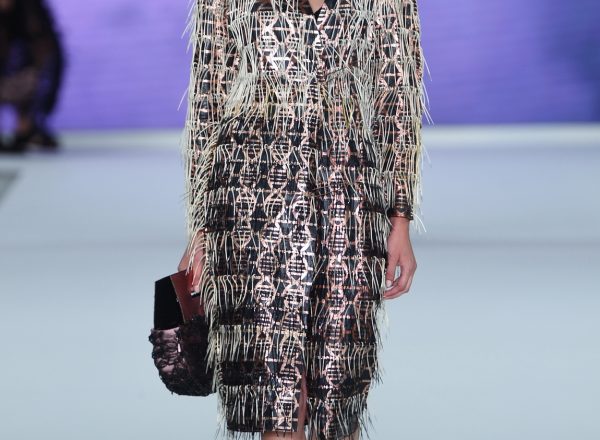 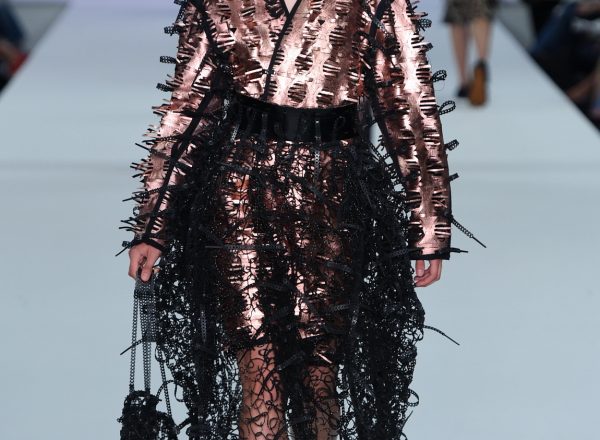 Aurélie believes it is very important for designers to work in cross-disciplinary ways: “It’s so important for me! I think that people do not collaborate enough in design, and in fashion, especially.” She believes a lot of design fields don’t look at science that positively: “But if you think about it, everything is engineered from science. For example, any object uses physics to be able to hold it or to stand up straight. A lot of technical processes come from science as well, the research and design process kind of echoes the scientific process and seems very methodical. You’re going to follow a protocol and stick to it, whereas often an artist is… like… ‘How do I break the rules?!’ For designers and artists, working with science can be challenging sometimes, because there are some things that you cannot do, so you have to work around this.”

As she developed her Kombucha fashion pieces, ASCUS, Art and Science, an Edinburgh open lab that seeks to fuse connections between science and art, granted Aurélie a residency for a year, so she was able to access the lab for free. “It was lovely, working with ASCUS really inspired my design process and  nourished it. I was able to come in anytime and ask for advice. And my project pushed them to investigate kombucha and now we’re doing workshops about it.”

Aurélie wouldn’t identify herself as a Food Designer: “I think I’m more cross-disciplinary, I wouldn’t even classify myself as a scientist. I’m in-between art, fashion and bio design, though I think my work definitely touches at expanding the questions ‘What is design?’, and ‘What is food?!’

The school I studied at in Paris did have a Food Design aspect to it, and although it was more about molecular gastronomy it did have a speculative aspect to it. I think the issue in fashion is that there is less of a tendency to think in cross-disciplinary ways. However, Alice Robinson a recent graduate of the Royal College of Art, bought a sheep and kept it for a year and then tanned, used the skin, used the wool and made accessories from the sheep. Using the whole carcass, she also made burgers from it.” 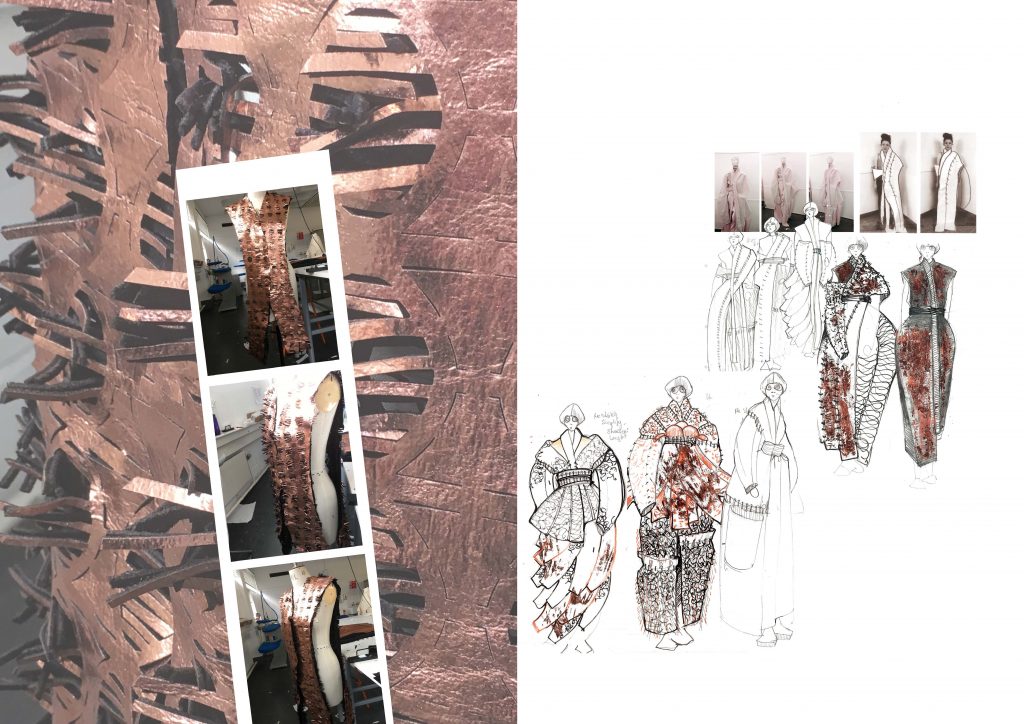 For Aurélie, using kombucha as a material during her fashion degree has been challenging. Firstly, the process growing the kombucha material was very time-consuming, whilst working on her entire fashion collection, all of which is designed to be disassembled for recycling. During the design process, Aurélie also discovered that the manufacture uses a lot of clean water. There also still remain challenges in making a sustainable garment which is completely waterproof: “It’s a speculative design process and in a way now you have people actually starting profit companies from SCOBY’s…they’re growing packaging and things like that. I am a bit dubious about those processes because I know that you cannot use it for food…it’s not hypoallergenic, or an antifungal material. The challenge is to treat the fabric in a way which is sustainable. I think it’s in a very early stage now and I think the SCOBYs have to be engineered to have the DNA modified on a molecular level to make it a viable material, which I didn’t have time to do – it takes a while!”

Aurélie has now moved to London to pursue her fashion career, and plans to further develop her sustainable fashion design work using scientific imagery as an inspiration. 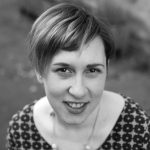