Anastasia Eggers, our Russia correspondent, found herself in Amsterdam last month to participate in one of Giulia Soldati's unique 'A La Mano' dinners, where cutlery is disposed of and guests‘ hands come into play. For us she tried to translate the sensorial experience into words.

‘A La Mano’ comes from Italian and means ‘by hand’. It is a culinary experience created by Italian food designer Giulia Soldati and chef Tommaso Buresti in which the taste is also explored ‘by hand’ in addition to the usual senses that we connect to taste. Cutlery and plates are removed from the table – this allows for a new relationship between the eater and the eaten that is directed by the distance and the missing mediators between the two. The card placed on the table suggests a series of gestures that can be used for consuming certain dishes but also leaves the freedom to invent their own choreography of the hand.

In the Mediamatic edition of ‘A La Mano’, there is also another layer: it suggests not only to get closer to food on the sensory level but also in terms of the knowledge about the origins of the food that is in front of us. In order to design the seven-course dinner, Giulia and Tommaso stayed at Mediamatic, an art centre near Amsterdam Central, for a month and immersed themselves in the world of local flavours, researching seasonal ingredients. They explored produce that appears in and around the area, from greens grown in Mediamatic’s own aquaponics greenhouse at the Biotoop Dijkspark to mushrooms grown in Amsterdam Noord by Mycophilia, one of the Mediamatic ETEN collaborators. They say that the inspiration for the menu doesn’t come solely from the ingredients, but also from the people they encountered during the research. The guests are therefore taken on a sensory journey through the landscape around Mediamatic that also talks about the actors of that landscape. 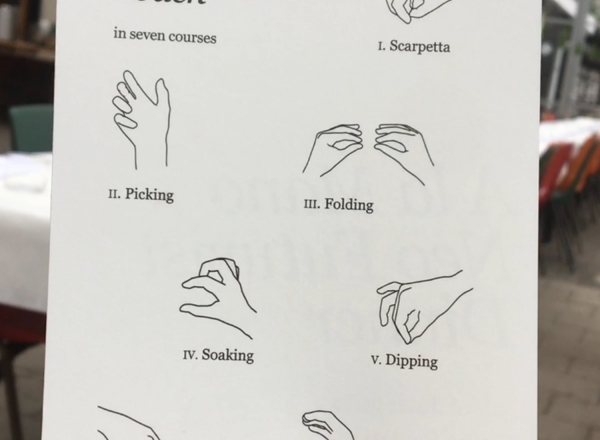 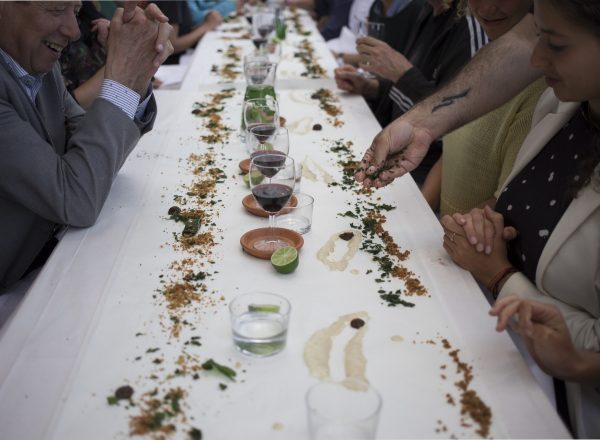 The dinner experience rediscovers the sense of touch in the process of eating by connecting experiences sourced from childhood memories (like a warm freshly baked bread placed on the palm of the hand), different culinary cultures (that freshly baked bread being a hollow puri that comes from the Indian subcontinent and can be filled with a sauce), or taking the food preparation processes to the dinner table (ravioli that is folded directly on the table and then broken with fingers by pinching off its fragments). During the dinner the guest share experiences: engaging in a collective act of hand cleaning with lime that is a natural antiseptic or trying to break a fresh loaf of sourdough bread that is still sticky on the inside because it just came from the oven.

One of the last courses is accompanied by the story about ‘Mangiamaccheroni’, people in Naples who started eating pasta in the shape that we know it now before the times that the fork appeared. Fork as an item of cutlery along with with the knife (and the table etiquette) was introduced in the 18th century. From that time the methods once possessed by the skilful macaroni eaters from the streets of Naples but also perceiving food through the sense of touch has been slowly removed from our everyday lives. ‘A La Mano’ attempts to restore the intimate connection between the food and the eater by introducing the sense of touch into the eating routing again.